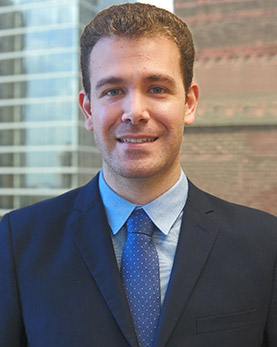 Dan Reo is the firm’s Marketing Director and works directly with the named partners, Eric Chaffin and Roopal Luhana.

Dan has an extensive background in marketing, data analysis, emerging technology, and business development. By collaborating with the team and through data, Dan prides himself in perfecting marketing channels and creating efficiencies for the firm and its clients.

Dan began his career with a widely experienced marketing company that focused on external branding and direct response marketing. In his prior position, Dan managed the company’s online marketing, web development, competitive search, and business development efforts. Dan was also responsible for developing internal brands and managing new clients across multiple verticals. In addition, Dan has extensive experience in building a client network that covers dozens of verticals, publishers, and advertisers.

In 2017, Dan relocated to New York City and joined the firm. He received his Bachelor of Business Administration and Digital Design from Pace University in New York in 2008.

2022: Dan’s Chaffin Luhana Foundation charity donation was to Environmental Advocates of NY this year. This organization is the leading New York non-profit fighting for a safe climate, clean water, and healthier communities for all.

2021: Dan nominated Clean Air Task Force (CATF). This organization pushes for the change in technologies and policies needed to get to a zero-emissions, high-energy planet at an affordable cost.